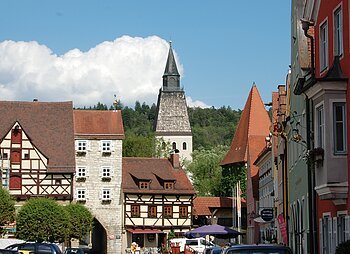 Berching’s origins can be traced back to more than 1,100 years ago. It is one the oldest towns in the region and has been deeply influenced by history and tradition.

Its impressive medieval townscape is characterized by 4 ancient gates, a fully preserved wall of the 15th century, which rings the oldest part of the town and is partially accessible, and 13 sharp fortified towers. In the centre there are magnificent and colourful middle class houses tidily lined up, half-timbered houses and imposing barns. Today they bear witness to the wealth of this old merchants' town. Wide paved squares, narrow and winding lanes and a streamlet flowing quietly through the centre invite to stroll leisurely through the town: come and discover Berching’s interesting past and rest in one of its typical Gaststätten and cafes with their friendly atmosphere.

A Town on the Water

Officially recognised as a holiday resort, Berching lies in the romantic Sulz valley, in the district of Neumarkt. This medieval jewel has also a long tradition strictly connected with water: in 1846 King Ludwig I of Bavaria built the Canal that was named after him, the Ludwig-Donau-Main-Kanal, which is still existing. Since 1992 Berching lies on the Main-Danube Canal too, one of the major European waterways.

A Hiker's and Cyclist's Paradise

The Canal holds a great fascination for cyclists: Bamberg, Nuremberg, Regensburg, Vienna… reaching these cities by bike from Berching is a matter of hours or days. The cycle trail Fünf-Flüsse-Radweg (Five Rivers Trail, 200 km) crosses Bavaria along the rivers Pegnitz, Vils, Naab, Danube and Altmühl and offers a spectacular natural landscape made of murmuring streams, wide woodlands and green fields.

The most beautiful sides of Berching can be discovered also hiking on 5 marked circular paths and on the 4 certified long-distance trails that cross the town. The most famous one is the Frankenweg (Franconian Way) that starts in the Rennsteig and ends in the hilly region of the Swabian Alb.

After a hike or a cycling tour you can "explore" Berching's adventure pool centre Erlebnisbad: a hot whirlpool, a 50-meter long water slide, children's wading pools, a jet stream canal, a steam bath and an outdoor area with sunbathing lawn are the best place to relax and enjoy.

Berching’s attractions and surroundings can be explored not only by bike or hiking, but also with a boat trip in the gorgeous Altmühltal region and a horse-drawn boat trip on the old Ludwigskanal.

Culture is definitely one of the most defining features of Berching, as testified by its rich event calendar that includes traditional festivals, theatre plays, concerts and much more. In fact, Berching is the native town of Christoph Willibald Gluck, who brought about the practical reform of opera. The town remembers its most famous son not only in the well-preserved house where he was born and in the Museum Berching, which houses a modern multimedia presentation on him, but also with the hiking trail Gluckwanderweg and a "country outing" that takes place every last weekend of August.

The historic horse market Berchinger Rossmarkt takes place here since 1722: every year, at the beginning of February, up to 150 horses are driven to the town centre for the most important winter folk festival in Bavaria.

On the last weekend of July and in September Berching fascinates with its festivals Berchinale and Kanal in Feuerzauber (Fire Magic on the Canal): the largest Bavarian light festival enlightens this medieval town with uncountable objects, works of art and projections strictly connected with light and culminates in the spectacular firework display on the Main-Danube Canal.

Not far from Berching lies the "green abbey" of Plankstetten. It is an important religious training centre with a beautiful Romanesque church, which invites to contemplation and reflection. Kloster Plankstetten is devoted to organic farming: monks sell their products in the monastery shop and use them in their tavern.

We hope we can welcome you to Berching soon. Come and experience at first hand the most interesting and beautiful sides of our medieval town pervaded by history. On a stroll through its narrow and winding lanes with centuries-old buildings and enchanting squares you'll feel the true essence of Berching.

How to Reach Us:

• Holiday apartments from 35 €/day for 2 people

• Travel guide through the Altmühltal region for coach groups

• Trip to the Benedictine Abbey of Plankstetten

• Many conference venues are equipped with the latest technology